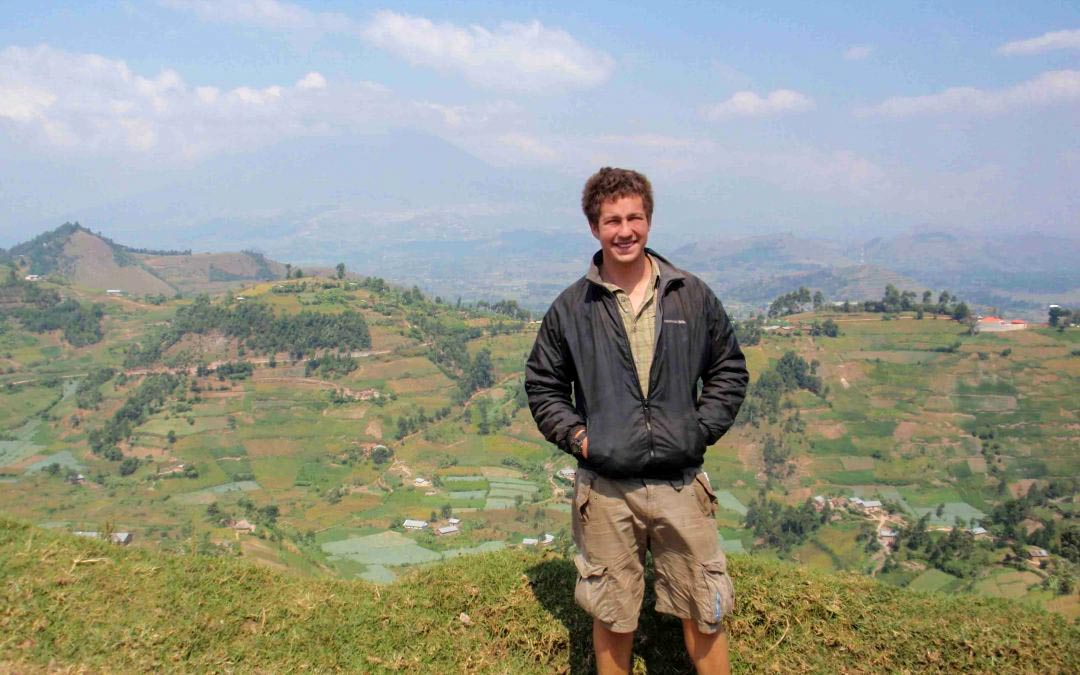 ‍Part 1 I went through Uganda both on the way to Rwanda and on the way back. What a fascinating country it was…We traveled across the border into Uganda from Kenya, where much to my surprise I was offered a free visa because of my Irish passport, while others had to pay $50 up for various different nationalities.We got into a campsite in Kampala the capital and quickly got tucked into some Nile Special Beers.After hanging around Kampala for a few days we started heading south west towards Rwanda. On our way we stayed at a great bush camp spot which was a farm owned my an awesome family. We pitched our tents right in the middle of all of these cattle with massive horns, over a metre (3ft) long. Pretty strange looking compared to the cattle I was used to.

Passing through Kabale a city in western Uganda we grabbed a few delicious pizzas and cakes from a local bakery. Then headed on towards the Rwanda border.—Part 2Heading back into Uganda we stayed for a day at Lake Bunyoni Overland Resort where we could camp right at the edge of the lake. Lake Bunyoni is rumoured to be between 44m and 900m deep and if thats true it would be the second deepest lake in Africa.There was a Jet Ski there that we could rent, having never been on a Jet Ski before I was tempted to say the least!Managing to rent the only “working” Jet Ski, we headed off one at a time out onto the lake. Out of the three of us rented it, I was the last to head out.It was brilliant being able to fly out onto the middle of the lake, flying around with such freedom and going around exploring the lake and all the island dotted around it.After spending enough time in Africa, it made me realise that I probably didn’t have long before the Jet Ski either broke down or ran out of fuel, like what happened on the motorbike in Zanzibar.Tearing back to the campsite, the latter happened! I ran out of fuel after maybe 10 mins on the Jet Ski after being told there was plenty of fuel. I was stuck there floating in the middle of this giant lake while all darkness began to set.

Not being able to do much, as essentially I was at least a kilometre or two swim from the campsite and getting to one of the island wasn’t going to help me much. Feeling like Tom Hanks in Castaway :) I began to frantically look around for a reserve supply of fuel under the seat but none to be sound.After just sitting on the Jet Ski for a while floating around the water, contemplating my next move, a local fisherman started coming towards me in his boat to my relief. Unfortunately that relief quickly went away when we couldn’t communicate at all, with such a language barrier, even with my best charades!I was lucky that not long after that a search party came looking for me of two of my friends and the Jet Ski owner came looking for my on a small boat.Relief in the end. I wasn’t a big fan of spending the night on a Jet Ski in the middle of the lake when cold started to come in.The next day we stayed at the lake for a few hours where we had a great laugh going swimming and diving off a very unstable looking platform at the top of a tree about seven metres in the air.

Later that day we headed toward Jinja a town beside Lake Victoria and close to the source of the White Nile. Staying again at the bush camp spot with the cattle with the big horns along the way!Driving into Jinja we arrived at Explorers Campsite where we went and watch the World Cup Quarter Finals which a few Nile Special beers.The next day I brought my girlfriend at the time to the doctors after we banged heads together climbing down a steep slope. Of course I came out without a scratch and see had to get a couple of stitches above her eye. It looked bad to say the least on my part!We hopped on two motorbikes that took up a few kilometres in towards Jinja to the clinic, who of coarse didn’t have enough supplies so I had to hop on the back of one of the motorcycles were my “chauffeur” and I went hunting for these special stitches that are meant to dissolve after a few days. After trying all five pharmacies in town, eventually we found what we were looking for in the very last one. Thankfully we got it all sorted out after that, and got back to the campsite.The following day was the big day for white water rafting on the Nile. I picked up these beautiful (In my opinion!) orange and yellow board shorts at the campsite and we headed off. We headed very close to the source of the White Nile and began our paddling and safety techniques.

We were then thrown into the thick off it and went down our first rapids, before hitting the bigger ones, ramming into massive waves that built up in the middle of the river. We got thrown out of the raft a good few times and we floated one by one town to a calmer part of the river with just our life jackets where a guy on a kayak would pick us up and get us back to our group.The big event then came up, we headed down a 3 metres high waterfall sideway, but somehow managed to stay in the raft.Later that they we headed back to Explorers campsite for a well earned BBQ and beers.The next day we crossing the equator again in Uganda on our way towards the Kenyan border heading north towards Addis Ababa in Ethiopia.We had to say our final goodbyes to Uganda.Check out more photos and a white water rafting movie below;

YouTube - White Water Rafting - White Nile - (Video is unedited and has No High Definition not recorded by me)Subscribe for more and better movies... :)