Trampled By A Bull In Pamplona 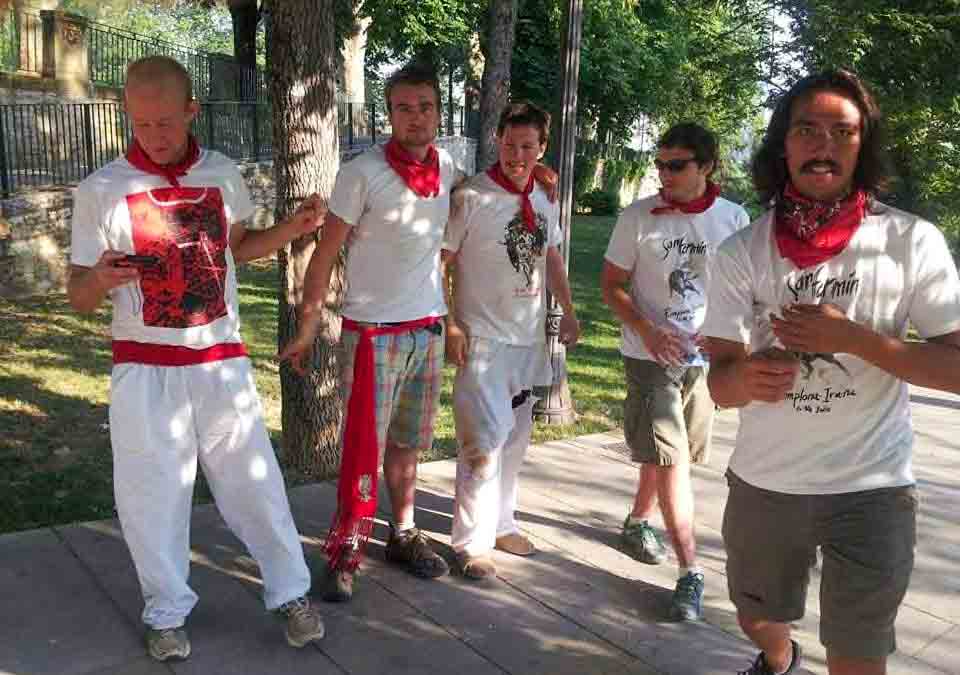 Bang! I was knocked back to the ground and I had just started to get up and the bull took another look at me and was determined to come back and finish the job…

The trip started as a plan among two friends from my original Africa trip. We were flying thru Barcelona and then getting a train from there on to the infamous Pamplona. The city were the most famous bull run takes place once a year with festivities going on for a couple of weeks each July.

After arriving in Barcelona I got straight on an airport bus to go and visit Andorra, a small micro nation located in the Pyrenees between France and Spain. The drive took maybe 3 hours after which I checked into my hotel. Then went for a long walk around the main city/town Andorra la Vella. The place was quite nice and hilly with some very cool looking buildings all surrounded by mountains and a river running through the middle. After a while I headed to McDonalds to pick up an ice cream and then headed back to the hotel for an overnight and a bus back to Barcelona the next day for the main event.

After meeting my friends back in Barcelona we headed out on the town for the next two nights and then it was on to the train on our way to Pamplona.

After reaching Pamplona we had nowhere to stay but it was pretty easy to find a place with so many people outside the station offering a spot. Once we got out of the train station the heat really started hitting me. I’m not sure what it was but for some reason I wasn’t feeling too good.

Anyway, we got back to this guy’s house who offered us a spot to stay for cheap. He showed up to our room which was basically 3 mattresses on the ground. It would do the job! We then headed to the local internet cafe to catch up on a few bits online, this being in 2013 I still don’t know why we were at an internet cafe!

For some reason my feet started swelling up, not a great sign considering I had a life or death run fast approaching. We stocked up on the main running gear we needed, basically a red scarf and a white t-shirt.

The bull run was only in the morning at 8am, we were there for 2 nights so that night we headed out on the town for the wild parties at night. The real reason that people go here every year. We definitely could feel the hangover the next day and we ended up missing the bull run that morning.

Either way I was starting to feel worse in the heat and was getting annoyed wondering if I’d actually be able to make the run or not. We hung around most of the day and then my two friends headed out that night while I stayed in unfortunately.

They go back in around 6 am the next morning with a plan to go running at 8 am. They also picked up two more lads, one of which I got on with pretty well in the short time I met him. He was a Texan and was telling me how he had a photo of his father from the running with the bulls about twenty years beforehand and how his father can look back on that photo and have no regrets about just going for it with a massive memory that he got to tell his future family about. This story really stuck with me and still influences me today.

Anyway it was enough to say screw it and I popped a load of pain killers for the feet as I hobbled out the door to get to the best areas to start the bull run.

The Morning Of The Run

We were waiting patiently for the actual run to kick off and then at exactly 8am we got the sign that things were kicking off.  People behind us started running and we took that as a sign that it was time to get going.

I’d seen plenty of pictures of people getting completely gorged by the bulls pretty regularly with horns literally going through peoples torso and arms. It was pretty sick stuff. So I was conscious of that. But…. at the same time I wanted to witness the bulls charging alongside me.

It was maybe 5 minutes or so later when I heard people making a lot of noise behind me as we ran our way through the narrow streets with everyone who wasn’t running out on their tiny balconies watching from there.

Then I heard the rattle of the bells on the large cows they have at the front of the herd of bulls. Apparently to keep the bulls calmer. Lets hope.

I could hear the pounding of hooves just behind me at this point so I decided enough was enough, so I took a jump into the side alongside the shops and continued running along. I looked over to my right and saw these massive bulls about 4-5 of them with the sharpest horns I’d seen. They charged right past and in a flash they were gone.

I continued running along, to the stadium where everyone ends up at the end of the run. In there they then let these smaller bulls run around with a blunting piece of tape on their horns.

There was a massive crowd in the stadium, most watching from the safety of the stands but many were in the actual grounds of the stadium where the smaller bulls were released.

My mind raced back to what my new Texan friend said earlier and I knew I had to do something memorable to make the occasion really stand out.

Stupid as it was I then started to go looking for these smaller bulls to hit me! I was terrified at the time and really couldn’t bring myself to go for it for ages. The thought of how it might hit you and how hard rightfully freaked me out.

The bull immediately turned around to me, looked at me and charged at me. Hitting me heavily as I went flying backwards. Knocking me to the ground. He then left me and turned around and looked for more prey.

I thought it was safe to start getting up but he spotted me trying and I suddenly got a bad feeling in my head, “Ok, this was a little more than I bargained for!” The bull charged and hit me along by legs flipping me over again and ripping into my new white pants. Clearly I had made a mistake getting up again. Thankfully people came in at that point and the bull started moving away.

Scary, when the bull came back the second time but what a memory to look back on! To top it all off an American guy with a GoPro strapped to his head told me that he got it all on video. What a legend. I ran after him to swap contact details and worked on getting the footage which thankfully I got to relive the tale!

After that we headed about and met the whole group to relive our war tales on the street and in the arena. A few proud moments in there. What a trip!

I’m not sure that I’d go back to the bull run again, as I’d not sure I agree with it but at the same time I’m glad I did it and have the memories.